Virgil Albin August Grewe of Burnsville, died on Wednesday, May 19, 2021 after a long battle of cancer at the age of 73. Virgil was 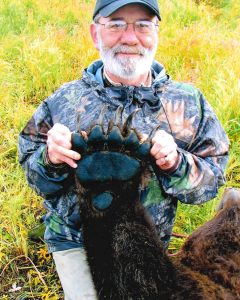 born in Gaylord to Albin and Erna (Moeller) Grewe on December 28, 1947. He was baptized and confirmed from Immanuel Lutheran Church in Gaylord. Virgil attended and graduated from Gaylord Public Schools in 1965.
After graduation Virgil served in the United States Army from 1967-1969. He was stationed in Fairbanks, Alaska. Virgil returned home and moved to the twin cities and joined the workforce at General Motors as a forklift operator in the parts division until he retired.
Virgil will be remembered for his warm smile, hearty laugh, and endless story telling abilities. Virgil’s main passion in life was his love of bow hunting and the outdoors. The consummate hunter was always full of stories about the “one that got away” and was excited to show you his videos and photos of hunts complete with commentary about the distance to the animal, the wind direction, and the situation around the shot. He was fortunate enough to travel to Africa for a dream safari, along with many hunts in the United States, Mexico, and Canada for bear, deer, elk, antelope, turkeys, and many other wild animals.
Virgil had a passion for music, playing his guitar, and going to concerts. He loved watching documentaries, hunting shows, cinema, and horror movies. He also enjoyed watching boxing and mixed martial arts. He truly loved the holidays and spending quality time with family and friends.
Virgil is survived by his niece, RaNaye (Ross) Grunzke of St. Peter; great-nieces, Amanda (Brock) Wiley of Belle Plaine; Danielle Grunzke of Washington, D.C., and by cousins and friends around the world.
Virgil was preceded in death by his mother and father, Erna (Moeller) and Albin Grewe; sister, Marcia Lee (Grewe) Templin and brother-in-law, Chester Templin.
Virgil will be laid to rest at Fort Snelling on Monday, July 19th, 2021.