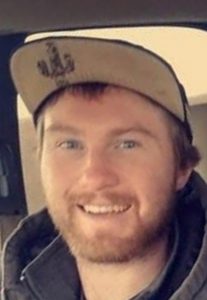 Ryan Stumm, age 26 of Arlington passed away on May 11, 2021 near Arlington as a result of a motorcycle/deer accident. Funeral services was Monday, May 17th at Immanuel Lutheran Church in Gaylord. Visitation was Sunday at the Kolden Funeral Home in Arlington and one hour prior to service time Monday at the church. Interment will be in the church cemetery.
Ryan Richard Stumm was born in Mankato on July 7, 1994 to Michael and Sharon Stumm. He was baptized on September 11, 1994 and confirmed on May 4, 2008 at Immanuel Lutheran Church in Gaylord. Ryan attended and graduated from Sibley East High School in 2012. He received a degree as an Agribusiness Service Technician from South Central Technical College in 2014.
Even at a young age Ryan worked endless hours at Arlington Raceway, Haggenmiller Lumber, New Sweden Dairy, Bongards’ Creameries and Seneca Foods. He then began his career working for Ziegler CAT as a Service Technician in Sioux City, Iowa from 2013 until 2016 where he then transferred to Shakopee. In 2017, Ryan decided to return to Iowa where he purchased a hobby farm in Oto for his horses, chickens, cats, and dog Blue. In 2020, Ryan decided he wanted to call Arlington his home once again and transferred to Mankato. He loved working as a Field Service Technician and just recently was able to experience working in the underground mines. Ryan was proud of being in a field service truck and his work ethic was indescribable.
Ryan’s hobbies in his younger years were playing hockey, along with go-kart racing which he was very competitive at. After high school he started bull riding along with occasional bronc riding and traveled often for rodeos where he made many friends. He also loved hunting and collecting guns, video gaming and seeing the country on his Harley with his brother. Family holidays were filled with endless laughs because of Ryan’s incredible drive to always win in foosball. No matter who played he never lost, even one handed. Ryan was known to just love life and enjoyed bringing a smile to everyone’s face with his ridiculous daily Snapchats, clever little shenanigans, quirky remarks, and his unforgettable laugh.
Ryan is survived by his significant other, Sirena Powell; parents, Mike and Sharon Stumm; siblings, Lindsey (Chris) Neisen, Joshua Stumm, McKayla Stumm (fiancé Luke Narveson); nephews and niece, Brody, Cohen and Avery Neisen; maternal grandmother, Lilah Otto; uncles and aunts, Duane Otto, Dennis Otto, Linda (Larry) Becker, James (Heidi) Otto, Jack (Raina) Stumm, Greg (Margie) Stumm and Lori Turbett; furry friend, Blue.
Ryan is preceded in death by; his grandparents Clarence Otto, Richard and Marlene Stumm and Uncle Richard Stumm Jr.