Bertha Hacker, age 97, of New Auburn passed away Sunday, May 23, 2021, at GlenFields Living With Care in Glencoe. Funeral Service was held on Wednesday, May 26, 2021, 1:00 p.m. at the Egesdal Funeral Home in Gaylord with interment in High Island Cemetery in New Auburn. Pastor Scott 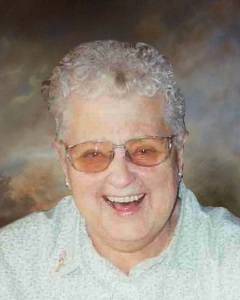 Richards officiated.
Bertha Laura Hacker was born on April 30, 1924, in Sibley Township, Sibley County. She was the daughter of Albert and Amelia (Ayers) Hahn. Bertha was baptized as an infant on May 17, 1924, at Immanuel Lutheran Church in Gaylord and was later confirmed in her faith as a youth on April 10, 1938, at St. John’s Evangelical Lutheran Church in New Rome, rural Arlington. She received her education at country school through the eighth grade.
On February 17, 1944, Bertha was united in marriage to Otto Hacker at St. John’s Lutheran Church in New Rome, rural Arlington. After their marriage, the couple farmed for many years. She also worked at M.G. Waldbaum Company now Michael Foods for 21 years, retiring in 1989. Bertha and Otto shared 52 years of marriage when Otto passed away on January 8, 1996.
Bertha was a member of St. Paul’s Lutheran Church in Gaylord.
Bertha enjoyed playing cards, cats, and spending time with her friends.
Bertha is survived by her many friends.
Bertha was preceded in death by her parents, Albert and Amelia Hahn; husband, Otto Hacker; stepdad, Albert Tolzman; siblings, Sidney Hahn, Melvin Hahn, Bennie Hahn, Amanda Tolzman, and Bill Tolzman.
Online obituaries and guest book available at www.hantge.com.