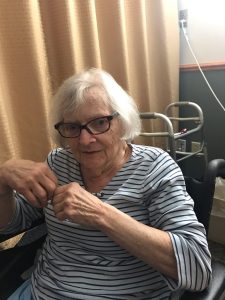 Virginia Alma (Rudolph) Seemann, age 79, of Dassel, died on Saturday, May 29, 2021, at the Augustana Lakeside Health Care Center of Dassel.
A memorial service will be held on Saturday, June 12, 2021, at 1:00 p.m. at the Gethsemane Lutheran Church in Dassel with Rev. Hollie Holt – Woehl officiating. The interment of the Urn will take place at St. John’s of New Rome Cemetery in Sibley County on a later date.
There will be a time to gather with the family one-hour prior to the service on Saturday, June 12, 2021, at the Gethsemane Lutheran Church in Dassel.
Virginia Alma Rudolph was born on July 23, 1941, in St. Paul. She was the second born daughter of Fred and Bernadette (Keintz) Rudolph. Virginia (Ginny) was baptized and confirmed at St. John the Baptist Catholic Church in New Brighton. Ginny graduated from Mounds View High School in May of 1959.
On December 2, 1961, Ginny married Kenneth Seemann at St. Paul’s Lutheran Church in Gaylord. The marriage was blessed with three children: Susan, Joseph and Raymond.
Ginny was a wonderful homemaker. She enjoyed cookie baking, from which her friends and relatives benefited. After living in Gaylord and moving to Arlington, Ginny waitressed at the Haystack Café for a couple of years. Ginny also worked at the Holasek Green House in Chaska. Ginny enjoyed bowling with Joanne Seemann for many years, until she dropped the bowling ball on her toe and quit. Ginny had a great sense of humor. She also loved and owned many cats. Ken and Ginny moved to Dassel in 1994. Ginny was admitted to Lakeside Health Care Center in Dassel about 2 ½ years ago.
She is survived by her husband, Kenneth of Dassel; daughter, Susan (Keith) Liljenberg of Talmoon; son, Raymond (Doni) of St. Paul; grandsons, Logan (Mandy) of Onamia, and Lucas of Minneapolis; great grandson, Waylon of Onamia; brother-in-law, Marlan Arndt of Mounds View; nephews, Paul and Jeff (Nancy) Arndt; brother-in-law, Robert Seemann (Rebecca) of Longville, and sister-in-law, Jean English of Minneapolis.
Her parents; brother, Butch; sister, Judy; graddaughter, Amber, and a son, Joseph precede her in death.