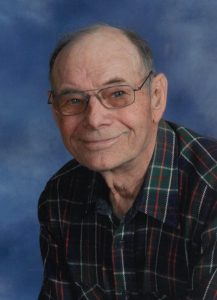 Funeral service will be 11 a.m. on Thursday, June 24, 2021, at the Immanuel Evangelical Lutheran Church in New Auburn. Pastor Dawn Quame will officiate, and burial will follow in the High Island Cemetery in New Auburn. Visitation will be from 9 to 11 a.m. on Thursday at the church in New Auburn. To leave an online condolence for his family, or to sign the guestbook, go to: mvfh.org
Clarence Martin Hahn was born on December 16, 1929, to Theodore and Ella (Schuft) Hahn on the family farm in New Auburn. He was baptized and confirmed at the Immanuel Evangelical Lutheran Church in New Auburn. Clarence attended country school through the eighth grade and then went to work and lived on the family farm to care for it the rest of his life. During much of his life, he loved to listen to old-time music and dance the polka. Clarence married Sharon Kuehn on December 9, 1967. They had one son, Peter Hahn. On September 5, 1987, Clarence married Dolores Dauer. When Clarence needed assistance with his daily cares, he became a resident of Oak Terrance Health Care Center in Gaylord.
Clarence is survived by his son, Peter Hahn of Winthrop; step-daughter, Joyce (fiancé Laray “Skip” Kral) Dauer of New Ulm; step-son, Keith (Kim) Dauer of Mankato; step-daughter-in-law, Diane Dauer of Hutchinson; nieces, Marion (Gary) Klimmek of New Ulm, Mary Lou (Brian) Serbus of New Ulm, Mavis (Jeffrey) Sandgren of Redwood Falls; his nephew, Milo (Gretchen) Hahn of Gaylord; he is also survived by several great, and great-great, nieces and nephews.
He was preceded in death by his parents, Theodore and Ella Hahn; his step-son, Craig Dauer; step-son-in-law, Wally Bauer; his sister and her husband, Frieda and Arnold Wichelmann; his brothers, Raymond, Frederick, and George and his wife Ruth Hahn; an infant brother and sister; both of his spouses, Sharon (Kuehn) Hahn and Dolores (Dauer) Hahn; and special friend, Vera Matthewson.