FacebookTwitterEmail
| logout
Elmer Kasten, age 103, passed away peacefully at his home in Gaylord, 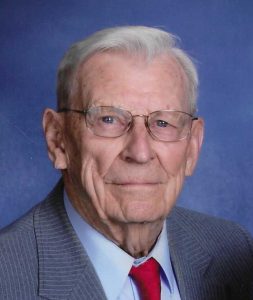 .
Funeral service was Friday, July 9, 2021 at Zion Evangelical Lutheran Church in Winthrop. Pastor Paul Meitner will officiate. Burial will followed in the Winthrop Cemetery in Winthrop.
Visitation was from 9-11 a.m. Friday, July 9, 2021 at Zion Evangelical Lutheran Church in Winthrop.
Elmer Fred Kasten was born on May 14, 1918, at Echo, Minnesota, to Henry and Theresia (Schwartz) Kasten. He was baptized and confirmed at Peace Lutheran Church in Echo. Elmer attended Echo grade school through the eighth grade. He farmed the family farm at Echo, and on September 30, 1951, he was united in marriage to Violet Schlack at Salem Lutheran Church in Comfrey. They remained at Echo until 1955, when they moved to a farm at Gaylord. Together they raised three children, Pat, Bev, and Jerry.
During his years of growing up at Echo, Elmer taught himself to play the cornet and mandolin. He played in a band and performed many concerts in the gazebo in the park. After farming the family farm at Echo and getting married, he purchased a farm at Gaylord. He and Violet raised their children there. He loved to go fishing and would often tell Violet to make a quick supper while he did chores and got the fishing gear ready to go. The family spent many fun evenings fishing and swatting mosquitoes, playing cards on Sunday afternoons, playing in the snow in winter and going sleigh riding.
After retiring from farming, Elmer started competing in the Minnesota state and national hand cornhusking competitions. He grew up husking corn by hand and was very fast. Elmer won many of these competitions. He also started wood working and made many beautiful clocks, crosses, pieces of furniture and toys. He enjoyed many nights sitting outside with the neighbors and going out for coffee with the “coffee guys”
Elmer’s faith in God was very important to him. One time a man asked him what he did for a living, and when Elmer said that he was a farmer, the man said that farming was a big gamble. Elmer responded that it wasn’t a gamble, it was faith in God.
Elmer is survived by his children: Pat Stults of Oregon City, Oregon; Bev (Dwaine) Bailey of Birch Bay, Washington; and Jerry (Wendy) Kasten of Gaylord. Grandchildren: Jenny Stults, Travis Bailey, Trevor (Megan) Bailey, Tyler (Erica) Bailey, Tiffany Bailey, Teresa Bailey, Adam Kasten, and Katie (Eric) Haefs. Great grandchildren: India Stults, Alexis Bailey, Kyla Bailey, and Zoe Haefs. Sister-in-law Dalores Stern, brother-in-law John Hewitt. Many nieces and nephews.
He was preceded in death by his parents, his wife Violet (2015), his grandson Dan Stults, his son-in-law Al Stults, his brothers, sisters and their spouses: Amandus “Pete” Kasten, Hilda (Roy) Lange, Adelia (William) Tabbert, Hilbert (Luella) Kasten, Loretta (Clarence) Ruschmeyer, Lydia (Ed) Kletscher, Edmond Kasten. Brothers-in-law Elvin Stern, David (Judy) Schlack. Sister-in-law Georgiana Hewitt.
Posted in Obituaries